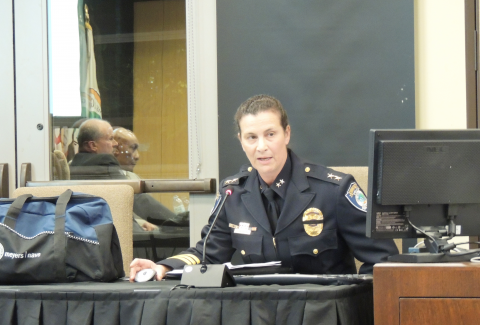 Commander Gina Anderson updates the Council on activities at the Women Leaders in Law Enforcement Conference. 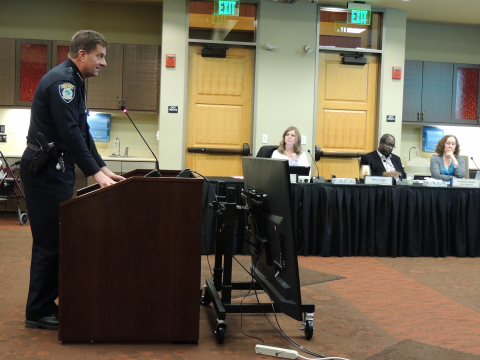 Pot plants and the prevention of prostitution in the City’s massage studios were just two of the notable items that the Citrus Heights City Council addressed at their November 12th meeting.

After assembling in a closed session for nearly an hour, the City Council opened their chambers to hold a study session on the Cal Mobile Home Repair Program, which provides financial assistance to fix and maintain owner-occupied homes. The closed session consisted in a conference with legal counsel on cases that are currently in litigation between the City of Citrus Heights, along with Successor Agency to the Community Redevelopment Agency of the city and two other parties.

For the regular meeting, Council Members Steve Miller, Jeff Slowey, and Mel Turner, along with Vice Mayor Jeannie Bruins and Mayor Sue Frost, saluted the flag and then got down to the business of city governance. Before visiting agenda items, members of the public were invited to address the Council on items of interest to the public with the Council’s purview. One of the three Citrus Heights residents to approach the podium was Dr. Amalia Griego who, together with her son, Max, presented Council Members with complimentary tickets to the upcoming crab feed on December 5th, which will benefit the Holy Family Catholic School.

A happy report about recent ongoing activities at the Citrus Heights Community Center on Sayonara Drive was followed by a troubling plea from Brian Scallon, a 37-year Citrus Heights resident who approached the Council to express his urgent concerns about a neighbor’s marijuana grow. “It’s insane what’s going on,” said Scallon. “My house reeks of marijuana daily. It makes me sick. I go to work for relief, and I work at a sewage treatment plant.” Scallon further claimed that his neighbor has turned “his house into a flop house for the homeless clampers” and has three male roommates to guard his marijuana crop. Scallon strongly articulated his belief that the City could save thousands of dollars in law enforcement costs and greatly enhance the quality of the neighborhood if they would do something to address this problem.

After public comments, the Council discussed and voted on several motions, all of which were carried. The first was a resolution authorizing the budgeting of additional funds for the Twin Oaks Mariposa drainage improvement project authorizing the city manager to execute a change order. Another subject was the adoption of a 2016 Action Plan to promote urban greenery. They call Sacramento the “City of Trees,” but it’s Citrus Heights that boasts proportionally more green than even Sacramento.

One potentially controversial measure taken by the Council during Thursday’s meeting was the implementation of an interim ordinance extending for one year a current moratorium on establishing, relocating, or expanding existing massage establishments. Twenty-six such businesses now operate in Citrus Heights, down from 35 since the moratorium went into effect. No reasons were specified at the public meeting for the closures, but local law enforcement is highly aware of the potential for these kinds of establishments to descend into criminal activity, which the City of Citrus Heights hopes to forestall by giving support staff a year at most to review the status of area massage parlors in light of AB 1147, which went into effect in January. This state legislation gives local governments the ability to regulate the local massage industry in order to prevent and reduce human trafficking and to ensure public safety.

Before adjourning, Citrus Heights Chief of Police Christopher Boyd updated the council on the Women Leaders in Law Enforcement Conference, which Boyd’s department hosted this year. Commander Gina Anderson, whom Chief Boyd asked to organize this year’s conference, then gave an extensive presentation of the event, which hosted 720 participants from all over the state.