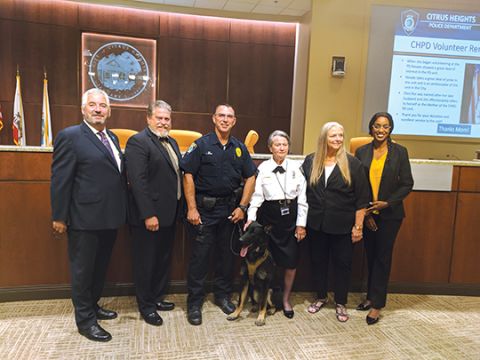 Flint-Rex, a 1.5-year-old German Shephard from the Czech Republic, is an apprehension dog trained in searching for narcotics, individuals, and evidence.

The purchase of Flint-Rex was largely funded by a donation from a CHPD volunteer, Renate Saylors. Sergeant Kissam said that Saylors has “played a large part in the CHPD K9 unit. She’s gone to training, she’s gone on ride-alongs, she’s actually a strong ambassador for the unit.”

Sergeant Kissam explained that Flint-Rex is named after Saylors’ late husband, Flint, and that Rex was the dog’s initial training name: “We’ve hyphenated that name in honor of her husband.”

Sergeant Kissam thanked Saylors for her generous donation and said that donations are crucial for the K9 Unit to fund the purchase of dogs, equipment, training for handlers and dogs, and medical needs for the dogs throughout their career.