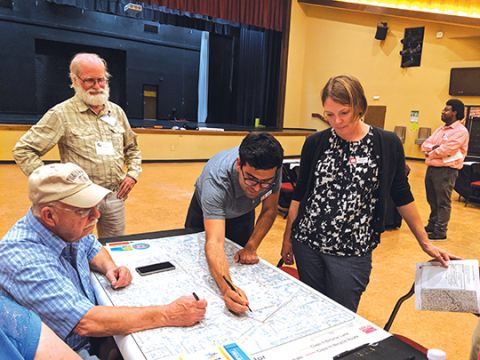 Citrus Heights residents attended an Open House event to share their traffic and safety concerns about the Carriage Dr. and Lauppe Ln. corridor. 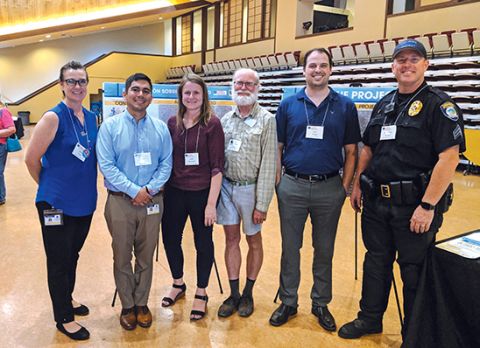 CITRUS HEIGHTS, CA (MPG) - On September 24, the City of Citrus Heights, in partnership with the San Juan Unified School District (SJUSD), held an Open House event for the Carriage Dr. and Lauppe Ln. Safe Schools Corridor Plan. The plan will be funded by $196,000 from Caltrans’ Sustainable Transportation Planning grant, with the goal of addressing major challenges such as speeding, traffic congestion, and high-risk conditions for motorists, pedestrians, and bicyclists.

Both the City and the SJUSD receive frequent complaints about the traffic situation along the Carriage Dr. and Lauppe Ln. corridor, which connects Antelope Rd. and Old Auburn Blvd. The corridor provides access to numerous neighborhoods as well as three schools — Carriage Drive Elementary School, Sylvan Middle School, and Mesa Verde High School — so the area experiences severe traffic congestion.

The Safe Schools Corridor Open House was held at Mesa Verde High School, giving local residents the opportunity to share their traffic and safety concerns about the area. Calvin Brown, a planner with Alta Planning and Design, which is consulting with the City for this project, said that the Open House was critically important in the evaluation process: “We want to get as much community input as we can about this corridor. …. We’re getting feedback about how it’s being used, who’s using it, when they’re using it, and what they perceive as problems.” Brown said they want to “increase efficiency and safety for everyone” who uses the corridor.

The traffic congestion that occurs when the three schools dismiss each afternoon is one of the most challenging issues. While the dismissal times at the schools are staggered, each approximately 10 minutes apart, it hasn’t done much to reduce congestion. Since 2016, enrollment at the schools has increased by 25%, and most students are dropped off and picked up by car, creating severe congestion at peak hours.

Dan Allison, SJUSD Safe Routes to School Coordinator, explained that the District’s regular fixed-route school bus system was discontinued back in 2010 due to the economic downturn of 2008. “What money there was went into the classrooms,” said Allison. The District recognizes that the lack of regular bus service has caused problems, such as shifting transportation costs to the parents and creating more congestion. But after so many years, Allison said it’s not feasible for the District to reallocate money from the classrooms just to revive the bus system. Instead, they are looking for solutions to improve the current system.

Allison said the District decided to partner with the City in order to determine what will best serve the community, and he stressed the importance of community input in the process: “It’s important to keep this open ended. We have a list of issues, and a list of possible solutions, but what I really want is to hear what problems you see, and what solutions you can see.”

Leslie Blomquist, Citrus Heights Principal Civil Engineer, said, “It’s nice to hear from the residents because usually we hear from the parents and the school district.” She said that the collaboration between the City and the District is vital: “If we don’t work together, we’ll never be able to solve the problem. … We want to come up with solutions to meet the needs of everybody.”

In addition to the congestion at peak hours, residents listed other issues such as speeding, illegal parking, illegal U-turns, students not obeying traffic signs, and sidewalks that are too small to accommodate large queues of students waiting to cross.  “It’s a challenging corridor,” said Blomquist. “There’s a lot of moving pieces, so we’re looking at all of it.”

Sergeant Shaun Gualco of the Citrus Heights Police Department (CHPD) said one primary area of concern is the Kanai and Carriage intersection, where Carriage Elementary and Mesa Verde High are located: “Residents complain on a regular basis of speed and stop sign violations,” and “due to the congestion, cars will block driveways, and people get frustrated.”

A significant issue at Sylvan Middle School is distraction. “And it’s not just the drivers,” said Sergeant Gualco, “it’s also the students and other pedestrians and bicyclists. Everyone is on their phones, distracted, not obeying the traffic signals.” Sergeant Gualco explained that congestion, distraction, and illegal parking and speeding create an unsafe environment on the corridor, increasing the risk of collision.

City and District staff stressed just how valuable it is to hear from those who live in or drive through the corridor. They want to get input from those who know the area best and see it every day. If you would like to share your opinions, visit www.surveymonkey.com/r/72T3XRH to participate in an online survey, which will be open until October 25, 2019. You can also access the survey link through the City’s website (www.citrusheights.net) by searching Safe Schools Corridor.