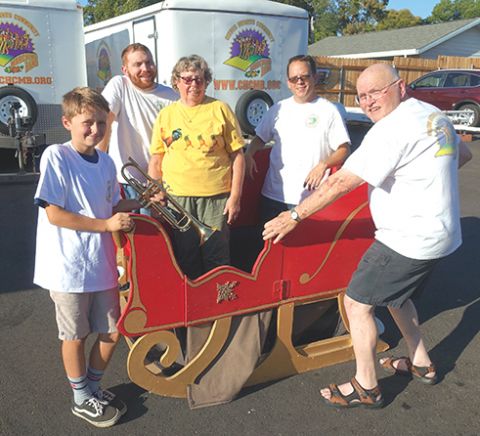 Band members ready Santa’s sled for the Howl ‘o Ween parade. As is his annual tradition, Santa will be Grand Marshal of the parade and then will meet with Festival attendees. Pictured are Blake Heidt (left), Ryan Watson, Kathy Cook, Joe Isaacs, and Harold Huff. The guys are members of CHCMB’s trumpet section and Cook is the band’s Program Director. Photo courtesy of Citrus Heights Community Marching Band 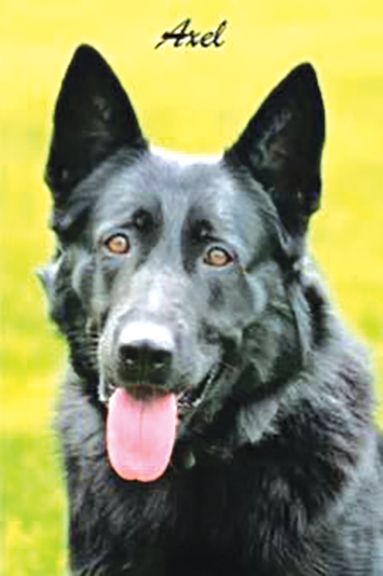 Axel, a member of the Citrus Heights Police Department’s canine unit, played a key role in stopping an active shooter type event outside Sunrise Mall in July. Axel and his handler, Officer Kyle Shoberg, will be honored at the Howl ‘o Ween award ceremony.

The 9 a.m. parade on Auburn Boulevard, will start at Twin Oaks Avenue and end at Rusch Park where the Harvest Festival will be held from 10 a.m. to 2 p.m. The park is located at 7801 Auburn Boulevard.

The Festival with free admission will include a Kids Zone with free games and a bounce house.  Other attractions will be craft and business exhibits, including several dog and pet business booths. The NorCal Cruisers Car Club and the Citrus Heights Police Department will have cars on display.

“We are pleased to announce Axel, a German Shepherd, and his handler, Citrus Heights Police Officer Kyle Shoberg, will be honored at the Festival’s award ceremony at 11 a.m.,” said Kathy Cook, CHCMB Program Director.  “The pair was involved in the July incident in which a suspect fired his handgun at a Citrus Heights department store with customers inside.  When police responded, the suspect started firing at them.  Officer Shoberg released Axel in an attempt to apprehend the suspect.  The suspect started firing at the dog and towards the police.  Officers returned gunfire at the suspect, striking him.  Police officers at the scene attributed Axel’s actions with saving their lives.”

“Always popular with attendees is the Sacramento SPCA’s Adoption Area with animals to hold, pet, and/or adopt,” said Cook.

More than 50 entries with more than 500 participants have signed up to be in the parade.  Santa Claus in a golf cart sled will be the parade’s Grand Marshal and then will be at the Festival to chat with youngsters and get their early Christmas wish list.  Citrus Heights Vice Mayor Jeff Slowey and Council Members Steve Miller and Porsche Middleton will ride on the Citrus Heights Rotary Club’s haunted house float.

“There’s still time for groups, businesses, and pets and their owners to register for the parade and/or the Harvest Festival,” said Cook. For information about participating, contact her at (916) 725-0198 or at abusycook@aol.com.  Also contact Cook regarding band membership and appearances.