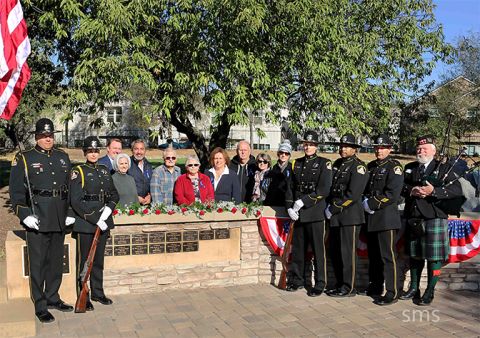 Patriots Park was the scene of remembrances last weekend. Located on the Carmichael, Citrus Heights and Fair Oaks border, the reserve contains a monument for fallen community heroes. 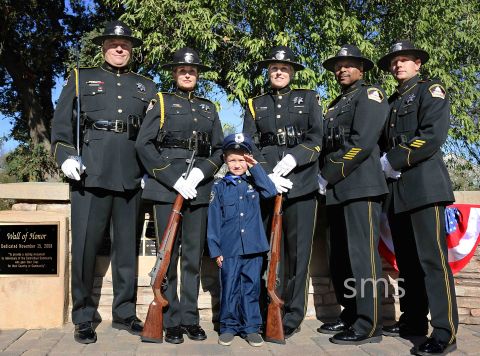 Built in 2008, the reserve’s stone monument is dedicated to 14 local men – from military, police, CHP and fire-fighting forces – who died serving nation or neighborhood during Carmichael Park District’s 57-year existence.  The community pays tribute to the heroes each November. From the 1960s through to 2017 – from Vietnam battlefields to California highways – the heroes fell while protecting American values. Space remains on the wall for plaque additions and the park district annually considers nominations.

Supervisor Peters noted that the 12-year-old park’s landscaping was maturing and its masonry was gathering the patina of age. “This park is more than a recreational gathering spot,” she said. “Patriots Park serves a deeper meaning. The individuals listed on this wall remind us how grateful we are to men and women who wear different uniforms but have a common bond in putting service above self. Regardless of whether they wore a Sheriff’s uniform or that of the Highway Patrol or a branch of the armed services or of fire protection, each was dedicated to the common good. They believed in serving us. It is fitting that we continue to remember each honoree.”

“We recognize the passage of time does not shield you from the emptiness you feel,” Peters told families of the fallen.  “We nevertheless hope Patriots Park is a source of comfort and pride in remembering your loved ones. Whatever uniform your loved one wore, we will be forever grateful for their dedication, commitment and service. The community will never forget them.”

Anyone may visit the Wall of Honor. Patriots Park is located at 6825 Palm Avenue, Fair Oaks. Those who wish to nominate a candidate for inclusion on the monument should contact the Carmichael Park District.