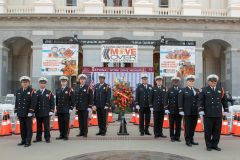 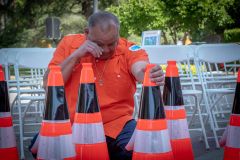 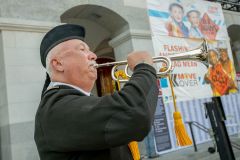 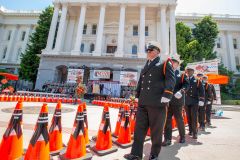 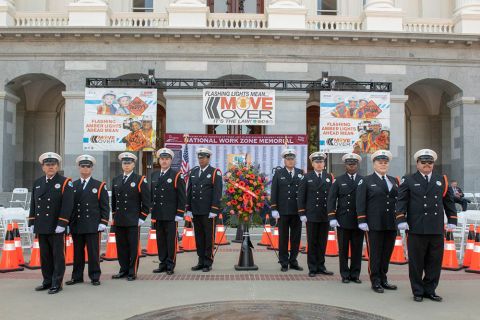 Caltrans employees honor the 189 fallen highway workers that have died since 1921. Photo courtesy of Caltrans 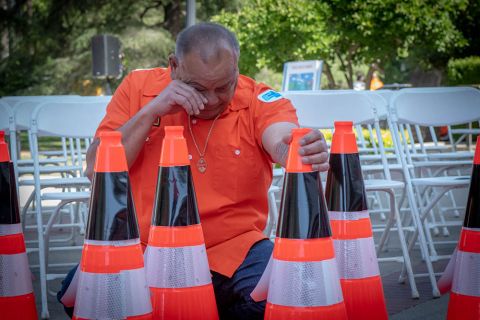 A Caltrans employee holds an orange cone while honoring the 189 fallen highway workers that have died since 1921. Photo courtesy of Caltrans

SACRAMENTO, CA (MPG) - Caltrans dignitaries, employees, families and friends gathered solemnly on the west steps of the State Capitol for the department’s 32nd Annual Workers Memorial to remember and honor the 189 public servants who have died since 1921 while building and maintaining California’s transportation system.

The yearly memorial – in addition to honoring families and giving staff the opportunity to pay respects to their fallen colleagues – reminds us to “Be Work Zone Alert” and “Move Over” a lane when you see flashing amber lights ahead, or slow down if not safe to do so.

“Safety is always Caltrans’ top priority and the tragedies that brought us here today have resulted in intensified safety efforts within the department,” said Caltrans Acting Director Steven Keck. “Zero deaths on our state highway system is the only acceptable number, and – as we recognize those who tragically died while at work on our transportation system – we remind all motorists to please Slow for the Cone Zone, Be Work Zone Alert and Move Over when you see flashing amber lights.”

During the ceremony, Caltrans placed 189 orange traffic cones in a diamond “caution sign” configuration, each bearing the name of an employee lost since 1921. A black cone in the center represented all people killed while working on the state highway system, including private contractors, tow truck drivers, California Highway Patrol (CHP) officers and other emergency responders. The commemoration also included the Caltrans Honor Guard, who led the symbolic tribute. Additionally, flags are flying at half-staff today at the State Capitol and at all Caltrans facilities in honor of these fallen workers.

The ceremony marked the third year in a row that no new names were added to the memorial — the longest stretch in nearly 75 years — though speakers at the memorial stressed the need for everyone to remain vigilant.

With the help of Senate Bill 1, the Road Repair and Accountability Act of 2017, as well as the recently enacted federal Bipartisan Infrastructure Law, Caltrans and local agencies now have significant additional funds to repair and maintain California’s transportation system. The additional funding also increases the number of Caltrans employees and contractors working on our roadways, increasing their exposure.

According to the U.S. Bureau of Labor Statistics, highway construction and maintenance work is one of the most hazardous occupations in the United States. In 2020, more than 6,500 work zone collisions occurred on California roadways, resulting in an estimated 1,964 injuries and 60 fatalities. Nationally, drivers and passengers account for 85 percent of the people who are killed in work zones.

In February, Caltrans announced a new Director’s Policy on Road Safety, which commits the department to the Safe System approach and reaffirms the vision of reaching zero fatalities and serious injuries on state highways by 2050. This policy takes steps to further a shift that began in 2020, as state transportation leaders recognized a bolder and more focused approach was necessary to combat the troubling rise in fatalities and serious injuries on California roads. The state’s 2020-24 Strategic Highway Safety Plan – managed by Caltrans and involving more than 400 stakeholders – was updated to include the Safe System approach.

Caltrans has partnered with the California Transportation Foundation to develop two funds to benefit the families of Caltrans workers killed on the job. The Fallen Workers Assistance and Memorial Fund helps with the initial needs a surviving family faces and the Caltrans Fallen Workers Memorial Scholarship is available to the children of these workers. For more information or to make donations, visit the California Transportation Foundation.